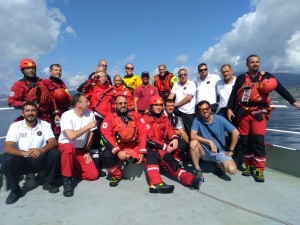 Rachel has been a volunteer crew member with the RNLI at Horton and Port Eynon Lifeboat station since 2003 and a helm since 2014. Rachel was accepted onto the exchange programme in Croatia this year along with seven participants from other European countries including Germany, Netherlands, Estonia, Portugal and Finland, to learn and share ideas between European rescue services.

The European Lifeboat Crew Exchange was initiated in 2012 to bring together volunteers from European lifeboat organisations to train together, hosted by the participating groups, and it continues to be a success and grow.

Rachel Hurford, who has worked for Hutchinson Thomas for seven years, comments:

“Participating in this exchange programme has been a very interesting and thoroughly enjoyable experience. I have been a volunteer with the RNLI for over sixteen years now, and to be accepted onto this programme to allow me to experience how other European rescue services operate was a fantastic opportunity.

“One of the best parts of the week was swapping experiences with the other exchange participants and learning how their organisations work and the challenges and environments in which they work in – and how it differs from what I am used to.

“For example, the participant from Finland was from a station based on a lake as opposed to the sea. The station is only operational for six months of the year as the lake is frozen over for the remaining six months.

“My roommate for the week was from Estonia and she was envious of the strong public support that the RNLI has in the UK. In Estonia, during the Soviet era, due to the closed borders, the tradition of leisure time seafaring was lost. As a result, it is still not something a lot of people in Estonia identify with and the Estonian lifeboat organisation struggles with public support and fundraising as a result.

“During the week, we also had a presentation from a Croatian naval officer who had taken part in a mass rescue of migrants in the Mediterranean, which was very interesting but also very sobering.”

During the exchange programme, Rachel took part in a variety of search and rescue operations onboard a Croatian search and rescue vessel as a crew, carrying out exercises such as recovering a man overboard casualty, searching a large area for a casualty using different search patterns, both in daylight and the dark and practising emergency life raft procedures.

“On reflection, I think we have a very good search and rescue system in the UK and are fortunate to have an excellent training facility at the RNLI Headquarter in Poole. Our way of working and ethos is very similar to the other organisations of the other Northern European countries. I feel very fortunate to have been able to experience this opportunity with the IMRF Lifeboat Crew Exchange programme.”